The Pomeranian Voivodeship thanks to being on the sea and having a 300 km coast line, and thanks to the varied landscapes with all their attractions of Kaszubia, Kociewie, Powiśle, Bory Tucholskie, the Żuławy, and Ziemia Słowińska, is one of the most attractive tourist regions in Poland. The Amber Road leads through Pomerania, making the region world famous, and linking it inseparably with Baltic amber.

Pomerania is also identified with its unique urban conglomeration – the Three Cities.

The Three Cities combine the advantages of a large city with those of a spa seaside resort.

You can leave the University campus or a large mall, and in a short time be in the Gdańsk Old Town (with its monuments), in Sopot with its night life, on one of the Baltic beaches, or on a walk through the picturesque Three Cities Landscape Park.

The Three Cities is a combination of history and the modern: the more than thousand-year-old Gdańsk, a multi-cultural city with historical architecture, closley connected with the Solidarity movement; modern Gdynia, dynamically developing from the 1920s on, throbbing with life, the capital of Polish sailing; and Sopot, at the heart of the Three Cities, the most popular seaside resort in Poland, often called the Monte Carlo of the Baltic.

The Three Cities are the site of some of the most important monuments in Europe: the Mary’s Basilica, the largest Gothic church in Europe; Malbork Castle, one of the largest medieval fortresses in Europe; and Sopot, home to the largest wooden pier in Europe. In the region, too, you can see the unusual half-timbered architecture of houses in the Żuławy area.

Pomerania is also known for its regional cuisine, mainly based on high-quality local products, obtained directly from local producers, which have allowed the region to be part of the European Network of Regions of Culinary Heritage. The region is known in Poland and abroad for some of its distinctive products – goose, Kaszubian strawberries, amber liquor, Kociewie butter, Słupski Chłopcyk blue cheese. These and many others are not just part of the region’s cultural heritage, but also draw tourists to it. 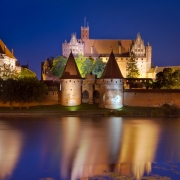 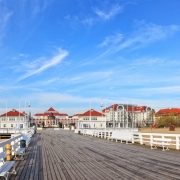 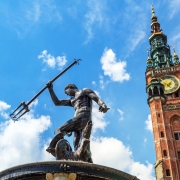 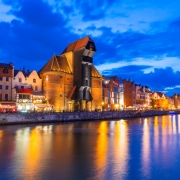