Sopot Hippodrome – A Gallop around History

Horse and balloon races, hunting the scent of a fox-tail, dog and even ostrich races – everything that once drew the crowds to Sopot Hippodrome is now the subject of an exhibition, created by historians, cultural historians, sociologists, museum specialists and horse lovers. The exhibition "A Gallop around the History of Sopot Hippodrome” is on at the Museum of Sopot until 4 October.

"We discuss the history of Sopot Hippodrome, the role of horses in Polish culture, there are little things in the exhibition connected to the traditions and social rituals related to horses”, said Sopot Museum’s director Małgorzata Lisiewicz in an interview with PAP. "We are part of a world of culture and science, a world which is popularising knowledge.”

The history of Sopot Hippodrome begins in the 1890s, when the land was used by the Black Hussar Regiment for show hunting, a type of equestrian event in which points are scored for time or style over a set distance. The tradition goes back to hunts where groups of riders set off in pursuit of a fox-tail, for example, with the winner being the one who captured the trophy.

It was on the initiative of the then commander of the regiment, August von Mackensen,that a hippodrome was built in the expanding spa town of Sopot. The first grandstand was constructed in 1898. The hippodrome enjoyed great popularity from the start, and interest grew in the period up to the First World War, and between the Wars. It became one of the town’s main attractions.  It held not only horse races, but also balloon races, dog races (before the First World War), an ostrich race (in the interwar period) and motorcycle competitions (even during the Second World War).

"We have to remember that Sopot was part of the Free City of Danzig and when war broke out, the hippodrome kept up its normal pace, racing was continued and the war wasn’t really noticed here”, Małgorzata Lisiewicz pointed out. "After the war racing started up again thanks to enthusiasts linked to the landowning tradition. These were people who from childhood had grown up with horses and traditions of independence, which is why the communist authorities looked down on the hippodrome for having overtones out of step with the dominant ideology.”

In the 1970s there were plans to construct a transport hub or a residential estate. As Sopot Museum’s director explains, the hippodrome fought hard, with activists, including the second director  Czesław Górski, organising a range of events with an international flavour. In 1975, Prince Philip, husband of Queen Elizabeth II, participated in the European Combined Driving Championships with a team of four horses. The exhibition shows an extract from a book lent by the Royal Archives at Buckingham Palace which contains the prince’s recollections of his stay in Sopot.

The exhibition also covers toy horses and horse burials, as well as art inspired by horses. You can see works by the greatest of Polish artists, including Jan Matejko’s study of a horse’s head, works by Juliusz and Wojciech Kossak, and a sketch for "Frenzy of Exultations " by Władysław Podkowiński.

According to the director, "The horse in art was a medium for various emotional, symbolic and romantic content -  an inspiration to artists. It was an element of inspiration in daily life, it adorned objects, ornaments, decorations and toys … Horses also worked very hard in cities, which is something we touch on.”

After the war, Sopot Hippodrome gradually switched from holding professional races to sporting events. In the last decade, a great deal of financial investment has been made from European funds. In June this year, for the first time ever a world-class CSI 5-star event was held in Sopot. The event coincides with the opening of the exhibition.

Together with the University of Gdańsk, Sopot Museum is planning to organise a conference devoted to the subject of horses between 24-25 September. 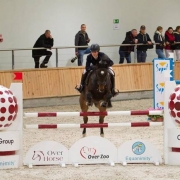