Dr Iwona Pawliczka Vel Pawlik from Poland, together with the Bahamas and Palau, the Ocean Sanctuary Alliance and Global Partnerships Forum organised a high-profile symposium on 1 July this year on the theme of sustainable exploitation of sea and ocean resources.

̏One important challenge today is the preservation of biodiversity in the oceans and the protection of sea resources”, said Ambassador Bogusław Winid, permanent representative of the Polish Republic at the United Nations in New York when opening the symposium dedicated to the protection of sea and ocean resources and held at UN Headquarters. “For our own good and that of future generations we have to combine our efforts in this matter”, Ambassador Winid added. He also stressed the importance of seas and oceans for global sustainable development and highlighted Poland’s achievements in this field.

Besides staff from the United Nations Secretariat and permanent diplomatic representatives, guest speakers included representatives of many UN agendas and programmes such as the Food and Agriculture Organization of the United Nations (FAO) and the United Nations Development Programme (UNDP), the World Bank, the European Union and independent scientific institutions. Dr Iwona Pawliczka Vel Pawlik from the UG’s Institute of Oceanography was amongst the host of lecturers and shared some experiences from a project carried out in the southern Baltic to re-instate the grey seal.

“The seal protection scheme allows their numbers to increase. This is confirmed by the need for and effectiveness of marine reservations”, said Dr Pawliczka Vel Pawlik in her presentation.

The issues raised by the symposium were summarised in a project for a post-2015 development agenda, which will be adopted during a UN session in New York in September this year. 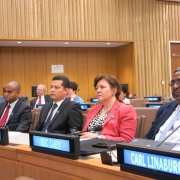