13 October 2015 saw the presentation of the Sopot Muse Award, given to Sopot residents for outstanding achievements in science and culture, and to young creators for a promising and successful start to their professional career.  The Patron of Sport and Patron of Culture awards were presented at the same time.

The Mayor of Sopot Award in the field of science, culture and art was founded in 1974 at the request of creative circles and has been known under the name of the Sopot Muse since 1993. In 2002 a separate award was established in the field of science, and in 2005 an award for young creators. The Sopot Muse is a bronze statue depicting half a female and half a shell, as designed by The Academy of Fine Arts’ Professor, Jan Szczypka.

During a grand gala held in the National Gallery of Art in Sopot , the Sopot Muse Award in the field of science went to Professor Dr hab. Edward Breza, a linguist and researcher into the Polish language in Pomerania, especially in Kashubia, who also specialises in studies of regional onomastics, local surnames and genealogy. The laudation was given by Aleksander Gosk, vice-chairman of the Kashubian-Pomeranian Association in Sopot.

The laureate was born on 24 September 1932 in Kalisz outside Kościerzyna. He graduated from secondary school in 1953 in Poznań and studied theology with the Congregation of the Resurrection of Our Lord Jesus Christ in Cracow. He worked in a secondary school in Kościerzyna where he taught languages: Polish, Russian and German, as well as religion. He then went on to study philology at the Higher Pedagogical School in Gdańsk, earning his MA in 1964, his PhD at the University of Gdańsk in 1972, habilitation in 1978, the title of UG associate professor in 1988 and finally full professor in 1993. The main scope of his academic interest includes: onomastics (member of the International Council of Onomastics in Louvain, Belgium, the Onomastics Commission of the PAN Linguistics Committee and of the Editing Committee of the academic journal Onomastica in Cracow), history of the Polish language, particularly in Pomerania, contemporary Polish with language culture, dialectology with Kashubian philology (including literary Kashubian), the influence of Latin on Polish, and the methodology of teaching Polish and Kashubian. He has held many positions at the University of Gdańsk, including vice-dean of the Faculty of Humanities, director of the Institute of Polish Philology and head of the Department of Dialectology and Onomastics. He is an active and respected activist and expert in the Kashubian-Pomeranian Association. Professor Breza has been editor-in-chief of academic publications, and editor and populariser. His academic achievements include over 2,000 scientific and popular science publications. Of special value are his penetrating monographs on historic onomastics, historic dialects of Pomerania, including pioneering, original syntheses on the subject of the Kashubian language.  The Professor’s special interests include the Kashubian language, its spelling and grammar rules, as well as textbooks. He is an unquestionable linguistic authority, still active in writing and lecturing despite reaching retirement age. Professor Edward Breza is an outstanding humanist, with particular achievements in the study of historical and cultural identity of Pomerania. Almost the whole of the professor’s academic activity is linked to Sopot, a citizen of which he has been for many decades. 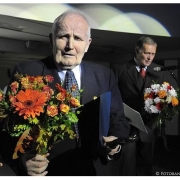