The City of Gdańsk’s Jan Heweliusz Award for Scholarship for Prof. Marek Żukowski

Prof. Marek Żukowski from the University of Gdańsk, one of the world’s leading scientists in the field of quantum physics, has been awarded the 2015 City of Gdańsk’s Jan Heweliusz Award for Scholarship in the category of natural and exact sciences. The highest award in Pomerania was presented to the professor for formulating the theoretical bases of the experimental multiphoton interferometry of entangled states and the research into the consequences of phenomena non-classic to our understanding of the basics of quantum theory and the possibility to use these phenomena in quantum communication.

The winner of this year’s prize in the social science and humanities category was Prof. Danuta Popinigis from the Stanisław Moniuszko Academy of Music in Gdańsk.

The City of Gdańsk’s Jan Heweliusz Award for Scholarship, also known as the Pomeranian Nobel, has been awarded since 1987 to members of the Gdańsk academic world for outstanding academic achievement. The prize-giving ceremony, with Paweł Adamowicz, Mayor of the City of Gdańsk, was held on 28 January at 12 p.m. in the Main Town Hall in Długa 46/47 in Gdańsk.

Professor Marek Żukowski is a world leader in the field of quantum physics. He has been investigating the bases of quantum mechanics and quantum information since 1987. He has written over 150 academic works, twenty-seven of which have been published in the leading American academic journal Physical Review Letters, while two articles and two commentaries have appeared in Nature. This series of works has been cited approximately 5000 times. He has received many important awards for research in the area of quantum physics. These include: the Prize of the Foundation for Polish Science, Maria Skłodowska-Curie  Award of the Polish Academy of Sciences and the COPERNICUS  International Polish-German Academic Award, which he received along with Professor Harald Weinfurter from the University of Munich. He has also won a host of awards from the Ministry of Science. He has received grants from the National Centre for Research and Development and the Ministry of Science and  Higher Education, as well as from the Foundation for Polish Science, including TEAM, and he had previously received the prestigious Foundation for Polish Science grant-award, currently known as the ‘Mistrz/Master’. He lead a team of Polish scientists awarded grants from the EU’s 6th and 7th Framework Programme. He is director of the University of Gdańsk’s Institute of Theoretical Physics and Astrophysics. He is also a member of the Council of the National Science Centre. Since 1st January, he has been editor of the journal of the American Physical Society Physical Review A.

Professor Żukowski’s greatest achievements are a method to observe multiphoton interference and a range of works related to the interpretation and structure of the laws governing the world of atoms and particles. In practical terms, this means, amongst other things, research into quantum communication in its broadest sense and devising the most secure codes.

The city and the University of Gdańsk have for many years been world leaders in the field of quantum physics. It was here that the concepts and solutions used world-wide were first developed, and the results of academic papers have been cited in thousands of works by other authors and used in dozens of laboratories. This led to the establishment in 2007 of the National Centre for Quantum Information, which is an important link in European research into the area of quantum information. The centre is headed by Professor Ryszard Horodecki. University of Gdańsk scientists are carrying out research into quantum cryptography, entangled states, quantum memory, the cloning and deletion of quantum information and quantum interferometry. World pioneers in quantum information, Professor Charles H. Bennett from the USA and Anton Zeilinger from Austria, have received honorary doctorates from the University of Gdańsk. 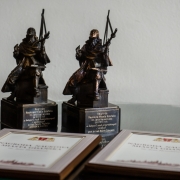 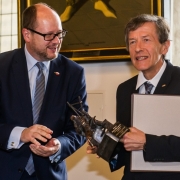 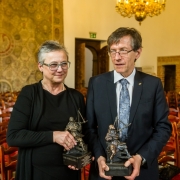