An article by an international team of scientists, including University of Gdańsk academics, has been published in the latest issue of Science. The research indicates that the previously observed body shrinkage of one species of bird is not the result of adapting to a warmer climate but rather a shift in the hatching period in the Arctic and in the time at which the invertebrates which constitute their food are most abundant. This means that these birds pay the price for climatic warming rather than adapting to climate change. The research was conducted on the red knot which hatches in the Taymyr Peninsula and spends the winter on the coasts of West Africa, migrating across Europe in autumn. The scientists expect that these changes may become a widespread phenomenon which in the future may spread to other species of birds which nest in the Arctic. This in turn may have very serious environmental consequences and requires particular scientific attention. This is an extremely important discovery and significant conclusions, which allow for a better understanding of the influence of climatic change on ecosystems.

The research of the international scientific team has shown that the red knot, a species of bird from the remote Arctic, bears the cost of the sudden climatic warming in its Siberian breeding grounds during its wintering in the tropical zone. The results of the research were published on 13 May 2016 in Science magazine in the article entitled “Body shrinkage due to Arctic warming reduces red knot fitness in tropical wintering range”. The international research team includes researchers from Holland (NIOZ and University of Groningen), Australia (Deakin University), France (Centre National de la Recherche Scientifique), Poland (University of Gdańsk) and Russia (Moscow State University).

Co-authors of this publication in one of the most prestigious of science magazines Science are researchers from the University of Gdańsk - Prof. Dr hab. Włodzimierz Meissner and Dr Agnieszka Ożarowska from the Faculty of Biology (Department of Vertebrate Ecology and Zoology). The research into migration of Charadriiformes has been conducted at the University of Gdańsk for thirty years. It was initiated by the Student Science Circle and has been continued to this day as one of the on-going research subjects at the Department of Vertebrate Ecology and Zoology. The results collected over the years have contributed to this significant discovery.

The red knot (Calidris canutus canutus) is one of a species of birds whose breeding grounds are located far in the North. Each year the birds migrate between their breeding grounds in the Taymyr Peninsula in the Arctic and their wintering grounds in West Africa. An analysis of satellite pictures has showed that over the past 33 years the snow cap in the red knot’s Taymyr breeding grounds has been melting half a day earlier each year, with the difference now being over two weeks. The melting of the snow marks the beginning of the abundance of insects and other land invertebrates in the Arctic, which form the staple food for red knot chicks.

The young red knots which were being caught in the Bay of Gdańsk on their way to Africa by the University of Gdańsk scientists as part of their research conducted since 1983, were smaller and had shorter beaks in the years when the summer in the Arctic was warmer and the snow melted sooner. Smaller young birds also have shorter beaks and have a lower survival rate in comparison with those which are larger and have longer beaks. This is due to the fact that in the African wintering grounds only the larger specimens with longer beaks are able to reach mussels buried deep in the mud which is revealed during low tide. Birds with shorter beaks are forced to feed on sea grass which is a less nutritious source of food. The low survival rate of the young one-year old smaller birds translates to a noticeable decline in the size of the population of the red knot.

The scientists expect that the changes in the size and body proportions which result in the negative changes in the size of the red knot population may become a widespread phenomenon which in the future may spread to other species of birds which nest in the Arctic. Due to the fact that it is in regions of the Arctic that the most violent changes connected with global warming are being observed, it is in this region that we may anticipate the most rapid change in the body size of the animals which live there. The changes have very serious environmental consequences and require particular attention from scientists. 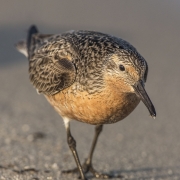 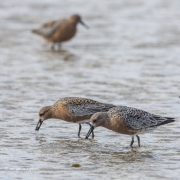 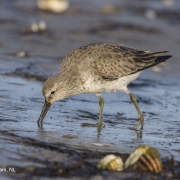 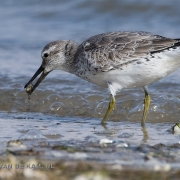 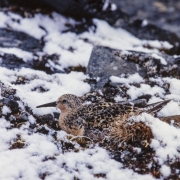