The Neophilology building and the central administration building, one of the newest and most modern investments by the University of Gdańsk have received the Mayor of the City of Gdańsk’s Award for the best architectural solution for the period 2011-2015. The architects – Wolski Architekci design office from Gdynia and the investor – the University of Gdańsk have been recognised for a skilful blend of solutions derived from purely technical conditions with a universal humanistic academic tradition.

The Mayor of the City of Gdańsk’s Award for the best architectural solution for the period 2011-2015 was presented for the first time. The ceremony took place on 2 June 2016 at the headquarters of the regional branch of the Association of Polish Architects, at the Court of the Brotherhood of St. George, 27 Targ Węglowy in Gdańsk. The award, presented by the Mayor of the City of Gdańsk Paweł Adamowicz and the Head of the Award Committee, Vice-Mayor of Gdańsk Wiesław Bielawski, was collected by the Rector of the University of Gdańsk, Prof. Bernard Lammek.

The modern building of Neophilology, built for the UG’s Faculty of Languages, as well as the new building of central administration , which houses amongst others the university’s new Rector’s Office, are some of the University of Gdańsk’s most recent investments. Classes in the new Neophilology building commenced in October 2015. “The construction of the Neophilology building as part of the University of Gdańsk’s Baltic Campus” project was partially financed from the fund of the Regional Operational Programme for the Pomeranian Voivodeship for the years 2007- 2013 and the Priority Axis 2 Knowledge Society, to the value of over 37M PLN. The building houses the Institutes of English and American Studies, Scandinavian Studies and Applied Linguistics, German, Romance and East-Slavonic Philologies as well as the Slavic Department, the Faculty’s administrative rooms, modern lecture halls, rooms for specialist translation and conference interpreting, a language laboratory, computer rooms, Dean’s office as well as an e-learning centre. The building has been equipped with cutting-edge technology and devices (e.g. translation systems or simultaneous translation booths). The central administration building is a separate investment challenge which holds a modern interdepartmental archive, which is part of a national archive network, UG’s Informatics Centre, the bursar’s office, rooms for the Rector’s office and other branches of central administration, as well as training and conference rooms. Both modern-technology-equipped buildings have been constructed as part of the development of the Baltic Campus of the University of Gdańsk in Gdańsk Oliwa, which brings together the largest number of students, staff and Faculties of the University of Gdańsk.

As members of the Committee stressed: “The design is characterised by simplicity and clarity of modernist form and well-conceived detail. Consequently, it has attenuated the dissonance resulting from the architectural disparity between the neighbouring buildings. The urban composition of the Neophilology building draws attention to the layout of the entry zone to the Rector’s office building and two semi-open courtyards. Given the planning of the entire campus, characterised by dispersion as it is, the solutions employed in the Neophilology building immerse students and staff into the congenial atmosphere of an academic microcosm”.

Architect Andrzej Kwieciński, who presented the laudation, added that the building of Neophilology and the new Rector’s office “by creating an interesting spatial composition, stands out amidst the entire campus with its successful and modern, though modest and subdued, architecture. The project’s spatial solution, based on a clear division between the buildings’ two main functions, additionally creates friendly and strikingly congenial courtyards, so desired by the main users – the students”. 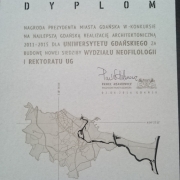 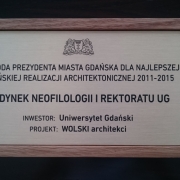 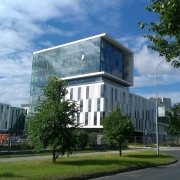 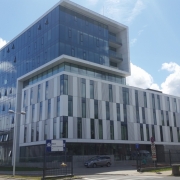 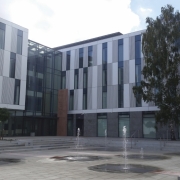 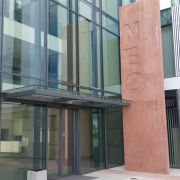