In his latest book Prof. Romuald Piekarski seeks the causes of contemporary nihilism and the absence of spirituality in culture, by using the Machiavellian idea and its underlying nihilism as the core for his own deliberations. The work also considers responsibility in public life and the role of intellectual elites. As one reviewer wrote – “a collection of moving and intensely erudite texts, characteristic exercises in political philosophy”. Machiavellianism, the Pathology of the Soul, Spirituality and Politics: Essays on Political Philosophy by Professor Dr hab. Romuald Piekarski from the UG’s Institute of Philosophy, Sociology and Journalism, just published by the Spółdzielczy Instytut Naukowy (Co-operative Academic Institute) is not an easy read but a vital one today.

The book is an anthology of articles from a fifteen-year period, divided into five thematic blocks. Part One, “Machiavelli, Machiavellianism. Politics and Nihilism”, presents the revolution in political philosophy as orchestrated by Niccolò Machiavelli, author of The Prince, the famous treatise on the exercise of authority. The main hero of the second chapter, entitled “Practical Reason: Virtues and Tradition”, is Alasdair MacIntyre, historian of ideas, ethicist and philosopher, and his concept of the ethics of virtue as voiced in his book After Virtue. In this part of his work, Professor Piekarski mainly presents political virtues, particularly the virtue of prudence, and analyses how they might be described in the context of practical reason or practical rationality. In the third section, “Pathology of the Soul: Spirituality and Politics”, the author, by following certain diagnoses on the crisis of civilisation (by Edmund Burke and Eric Voegelin, amongst others), focuses on the absence of the spiritual in contemporary culture and the proposition of its restoration through a specific kind of renewal in political theology. Chapter Four, “Philosopher in the Polis”, is a continuation of certain issues from Chapter Three in which the author (referring back to traditions of classical political philosophy) returns to an analysis of the fascism of Karl Jaspers and Hannah Arendt in the context of the guilt and responsibility of intellectual elites and writes of the iniquity of politics in times of mass society. His deliberations concentrate on structural, ideological and political determinants. The final part, “The Future of the World in the Face of Globalisation”, is dedicated to issues and challenges in globalisation and the search for a political alternative for a globalised world.

As Professor Ryszard Mordarski from Kazimierz Wielki University in Bydgoszcz puts it: “Piekarski’s Machiavellianism, the Pathology of the Soul, Spirituality and Politics: Essays on Political Philosophy is a collection of moving and intensely erudite texts, characteristic exercises in political philosophy. In diagnosing contemporary nihilism and the absence of spirituality in culture, the author uses the Machiavellian idea and its underlying nihilism as the core for his own deliberations, demonstrating the later destructive trend (Hobbes, Kant, Nietzsche) in contrast to the previous trend of responsible investigation into practical reason (Aristotle, Cicero, Thomas Aquinas, Edmund Burke). By linking conservative respect for the virtue of wisdom and prudence with the republican understanding of the state and political activity, the author proposes a new way to look at problems of modernity, linked to globalisation, responsibility in public life and the role of intellectual elites. In these solutions, he refers to the most important thinkers of our age, Max Weber, Karl Jaspers, Hannah Arendt, Eric Voegelin, Leo Strauss and Alisdaire MacIntyre”.

Dr hab. Romuald Piekarski, Professor of the University of Gdańsk, works at the UG’s Institute of Philosophy, Sociology and Journalism. He is head of the Gdańsk Section of the Polish Philosophical Society. The professor’s interests fluctuate between political philosophy, the philosophy of religion, metaphysics and political ethics. He has written over 60 publications, including three books, Problem wartości poznawczych literackiego i filmowego dzieła sztuki (UG, Gdańsk 1993), “Wokół prawdy i interpretacji dzieła literackiego” in Zagadnienia estetyki współczesnej. Sztuka – wartości – poznanie with P. Kawiecki (UG, Gdańsk 1994), Koncepcja cnót politycznych Machiavellego na tle elementów klasycznej etyki cnót (UG, Gdańsk 2007). In addition he is editor of several anthologies and is editorial member on the annual Civitas. He has published in the monthly Znak, the quarterly Pieniądze i Więź; Pro Fide, Rege et Lege; Arka; Arcana; Christianitas and Obywatel. He is currently Head of the Polish Philosophical Society (Gdańsk Section). He has received several awards and prizes – Medal of the Commission of National Education, Silver Medal for long service, and, at the request of the Institute of National Remembrance, the Cross of Freedom and Solidarity. 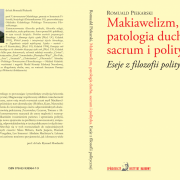