Take a walk under a fin whale! | University of Gdańsk | Uniwersytet Gdański

Take a walk under a fin whale! | University of Gdańsk | Uniwersytet Gdański

Home » University » News » Take a walk under a fin whale!

Take a walk under a fin whale!

We are happy to announce that the UG’s Faculty of Biology has finished work on the skeleton of a razorback whale, also known as the fin whale, and  the second largest mammal on Earth in terms of size. The skeleton weighs almost 1000kg and is 17 metres in length. It has been loaned for 10 years by the Oceanographic Museum in Stralsund, Germany.

Work began with the preservation of the bones which were mounted on a specially prepared metal construction and then finally raised to the level of the first floor of the main hall.

Dr Zbigniew Zawada played the leading role in the entire procedure and not for the first time in our faculty. It’s worth remembering that the faculty’s  very popular exhibition of large mammal skeletons in wings A and C owes its existence to him. Significant help in mounting the fin whale was provided by mgr Martyna Jankowska-Jarek and mgr Konrad Bidziński – doctoral students from the Department of Vertebrate Ecology and Zoology at the UG’s Faculty of Biology.

Just recently our fin whale ‘took part’ in the All-Poland Teriological Student Conference, which took place in Wrocław between 26-29 May 2016.

Abstract of the lecture "Anatomy of the Bone structure and Mounting of the Skeleton of the Razorback Whale Balaenoptera physalus (L.)"

The razorback or fin whale is a member of the Baleen family (Mysticeti)– a clade within the subgroup Cetacea. It is the world’s second largest mammal and can be found in all ocean waters, although it is threatened with extinction. According to the IUCN it is in category EN (endangered).

In 2016 the University of Gdańsk’s Faculty of Biology obtained an incomplete fin whale skeleton from Stralsund’s ‘Ozeaneum’ in which elements of the front fins were missing. The skeleton is destined to become an exhibit in the main hall of the UG’s Faculty of Biology. Acquiring the skeleton and the complex work on it make close inspection of the anatomical structure of this exceptional aquatic mammal possible. The skeleton was prepared by Ozeaneum staff in Stralsund over a dozen years ago but has never been exhibited since. The skeleton consists of approximately 110 elements, including both hip bones from the pelvic girdle. The 17 metre-long complete skeleton (3.5 metres of which is the skull) and the well preserved baleen are worth noting.

Analysis of the skeleton proved that this individual was not fully mature, which was confirmed by the proximal and distal epiphyses unfused with the vertebral body and the unfused bones of the front fin. The work involved the conservation of bones as well as the actual mounting on to a metal construction, which was then raised to first floor level in the hall of the University of Gdańsk’s Faculty of Biology. 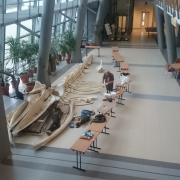 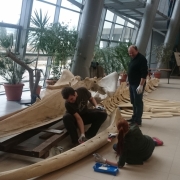 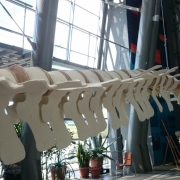 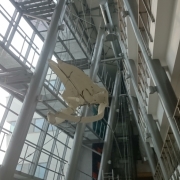 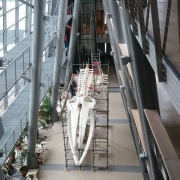 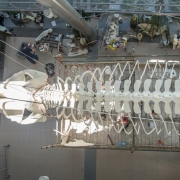 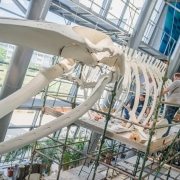 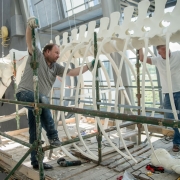