Reunion of Graduates from the Sopot Centre for the Economic Sciences

The event was organised by the Graduate Society of the Sopot Academy of Maritime Trade, the Sopot Academy of Economics and the UG’s Faculties of Economics. The president of the society greeted those present by pointing out that it is probably the European organisation with the longest name. Graduates were also greeted by the Rector of the University of Gdańsk, Prof. Dr hab. Bernard Lammek, who underlined the importance the university attaches to cooperation with organisations which represent its graduates.

“Through their achievements and successes, graduates are living proof of the potential the university gives to its students” Professor Lammek said.

The people gathered in the auditorium were the best evidence of that potential. They included the former President of the Republic of Poland Aleksander Kwaśniewski, former Prime Minister Jan Krzysztof Bielecki, former Polish Ambassador to the USSR and to Russia Stanisław Ciosek, former member of the Monetary Policy Council Professor Dariusz Filar, President of the Port of Gdynia Janusz Rosiński, Members of Parliament Dorota Arciszewska-Mielewczyk and Joanna Senyszyn, UG Vice-rector for Development and Finance Professor Mirosław Szreder, Dean of the Faculty of Management Professor Jerzy Bieliński and Dean of the Faculty of Economics Professor Krzysztof Dobrowolski.

Graduates from the 60s, 70s and 80s were in the majority, but there were also some who had completed their studies in the 1940s and were now over 90 years old. They received commemorative medals from the Graduate Society. The same medals were also given to ex-students of the UG’s economics departments who can boast sporting achievements in Poland and internationally.

Members of the government underlined the significance of the academic education in Economics taught in Sopot for 70 years. Member of Parliament Dorota Arciszewska-Mielewczyk read a letter to those present at the reunion from the Minister of Marine Economy and Inland Navigation, who had given his patronage to the reunion. Jacek Karnowski, Mayor of Sopot, stressed the significance the economics faculty and the academic environment have for the city, and Aleksander Kwaśniewski and Jan Krzysztof Bielecki drew attention to the exceptionally great influence of graduates of the University of Gdańsk on the changes which occurred in Poland in the late 1980s/early 1990s and the later shaping of the political-economic situation in the country.

There was a sentimental journey into the past in the shape of the Panel of Graduates, led by Professor Dariusz Filar with the participation of Tomasz Kloskowski, Director of Gdańsk Lech Wałęsa Airport; Ewa Wyzga, co-founder of ‘Bella’ Polimer Composite Concerns; Dorota Arciszewska-Mielewczyk; Aleksander Kwaśniewski; Roman Kinda, President of Navimor International; Janusz Jarosiński, President of the Port of Gdynia and Janusz Lewandowski MEP.

“We had our practice in a branch of the Trade Bank on Kościuszko Square in Gdynia”, recalled Aleksander Kwaśniewski. “We wrote out letters of credit and had to sit at work for the full eight hours. After work, we went to a nearby bar and talked mainly politics. It must have been then that I decided I preferred politics to letters of credit.”

“I was sitting in the corridor studying for an exam when a professor came along and asked me if I wouldn’t like to work at the airport. He gave me two days to decide and left”, remembered Tomasz Kloskowski. “After half an hour he came back and asked if I’d made up my mind. That’s how he taught me to take quick decisions.”

“My husband and I were going in the lift with an application for a loan to start up a business”, said Dorota Arciszewska-Mielewczyk. “A lady travelling with us asked what we were in the bank for. When I said it was a loan for a company, she got all indignant ‘What, so young? I wouldn’t give you a loan’. It was possibly then that I realised that I wanted to change something in this country and it was time to get involved in politics.”

Obviously there were as many such memories as there were participants in the reunion, but the graduates did not forget current students who presented the achievements of their academic circles and took the opportunity to check their older colleagues’ knowledge of the latest technologies. The ‘Lider’ Computer Circle, for example, prepared a multiple-choice test, which asked difficult questions on the meaning of ‘selfie’, ‘hashtag’ or ‘like’.

The circles also took part in a competition on an academic paper linked to their activities. First prize and 7,000 zł funded by the society was won by the E-xpert Circle from the Faculty of Management. The prize-giving was preceded by a panel which took important questions from the floor and in which present-day managers got interesting answers from future management. They were asked what salary a recent graduate from the UG’s economics faculties could expect from potential employers. Answers ranged from 3 ‒ 4,500 zł.

In the afternoon, participants in the reunion met for a requiem mass for departed colleagues, while in the evening, on the coast of the Bay of Gdańsk, the graduates enjoyed themselves like in the old days at a special supper in the club SCENA in the ‘Smak Morza’ restaurant, accompanied by a stunning natural display in the form of a storm raging over the Tri-City. 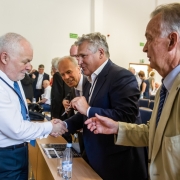 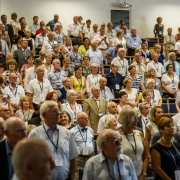 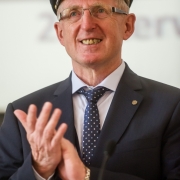