Humpback rescued from fishing nets in the Bay of Gdańsk

Thanks to a speedy and efficient rescue operation by the Professor Krzysztof Skóra Marine Station of the University of Gdańsk’s Institute of Oceanography and the Gdańsk Maritime Branch of the Border Guard, a humpback whale caught up fishing nets was released.

Shortly before 5 a.m. on 4th July 2016, the Marine Station in Hel received a report from the fishing vessel JEL-8 about a whale caught up in nets in the Bay of Gdańsk approximately 0.5 km north of Westerplatte. The information must have concerned a whale which had been observed the previous evening by the crew of the STS Generał Zaruski. As the crew was holding on to the nets, the animal ‒ the same length as the cutter itself  ‒ was prevented from entangling itself further until help arrived. Once informed by the Marine Station, the Gdańsk Maritime Branch of the Border Guard reacted with lightning speed. An SG-215 hurried to the scene in order to secure the area and at the same time an SG-112 patrol vessel boarded scientists from the Marine Station and transported them to where the whale was trapped. There, together with officials from the Border Guard, they freed the animal.

Detailed information (in Polish) can be found at the website  of the Professor Krzysztof Skóra Marine Station of the University of Gdańsk: http://hel.univ.gda.pl/aktu/lastminut/humbak_ratunek.html

Footage of the rescue operation can be viewed at the website of the Gdańsk Maritime Branch of the Border Guard: http://www.morski.strazgraniczna.pl/mor/aktualnosci/18065,Akcja-uwolnienia-wieloryba-na-Zatoce-Gdanskiej.html 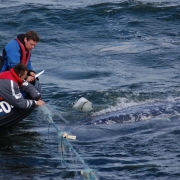 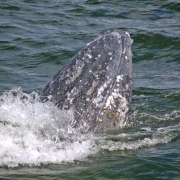 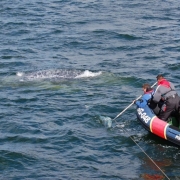