Start to the rehabilitation season for common seals

On 10 July 2016 at 3.30 p. m. we received a report of a small seal lying on the beach in Hel by Exit 64. Staff from the Marine Station quickly headed for the spot. After a short search, they found a common seal cub (Phoca vitulina), being watched over by the tourists who had reported the find.

Once the seal had been brought to the Marine Station in Hel, a basic examination and veterinary consultation were carried out. The little male weighs a mere 10.6 kg for a body length of 96 cm. Blood tests point to a mild infection, the seal is weak and its little body is covered in numerous surface wounds. Suitable pharmacological treatment and diet have been implemented so that the seal can recover strength as soon as possible. 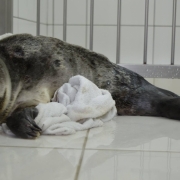 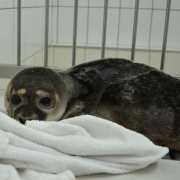