New species of orchid from Columbia

A new species of orchid, Telipogon diabolicus, was discovered in the course of field research conducted in southern Columbia. The name of this small orchid is a reference to the structure of the gynostemium (reproductive structure created by the fusion of pistil and stamen), which resembles a devil’s face. The previously unknown species was described by Dr Marta Kolanowska and Prof. Dr hab. Dariusz L. Szlachetko from the Department of Plant Taxonomy and Nature Conservation of the UG’s Faculty of Biology in cooperation with Ramiro Medina Trejo (Columbia). Due to the location of the only known population of T. diabolicus near a road and the sensitivity of high-mountain plant formations to climate change, the orchid has been classified as critically endangered.

The most intriguing question concerning T. diabolicus concerns its pollination. Research hitherto indicates that in the case of orchids of the genus Telipogon the pollinia are carried by insects during pseudo-copulation (with the pollinia attaching themselves to the body of an insect male as it attempts to copulate with a flower resembling a female) but so far no material has been published to confirm this assumption. It would be enormously interesting to observe an insect for whom the ‘diabolical’ gynostemium resembles the female of its own species.

After the information on the discovery of the ‘diabolical orchid’ was published by the EurekAlert! service and the “Speaking of Science” section run by the Washington Post, the orchid quickly gained incredible ‘popularity’. Information on T. diabolicus has appeared, amongst others, on internet sites of the International Business Times, Live Science, Nature World News, Science World Report, National Geographic, and also in the media in Columbia (El Espectador), Spain (www.abc.es), Italy (Notizie.it), Germany (www.spektrum.de), the Czech Republic (Ekolist.cz), Russia (ria.ru), and even Vietnam  (www.baoxaydung.com.vn).

For nearly 10 years the diversity, systematics and biogeography of Andean orchids have remained the focus of research for staff and doctoral students of the Department of Plant Taxonomy and Nature Conservation, who have described over 100 species of previously unknown South American orchids. Work in Columbia is conducted in partnership with the Buenoy Yumartán Aldea Ecológica foundation and the local researchers. 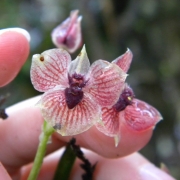 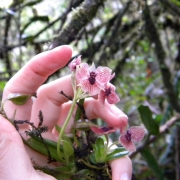