Over 30,000 students, doctoral and postgraduate students as well as 1,700 academic teachers have started the new academic year 2016/2017 at the University of Gdańsk. The university admitted over 11,500 students to the first year of study. 3 October 2016 saw the inauguration of the academic year for the largest university in the Pomeranian region.

The ceremony was attended by a number of invited guests, representatives of national, voivodeship, local and church authorities, Pomeranian MPs, university rectors, representatives of scientific institutions, culture, business and media as well as the UG’s academic community, particularly the students and doctorate students about to commence the new academic year.

This inauguration began with the symbolic handing over of the rector’s insignia (sceptre and chain) to the Rector Prof. Jerzy Gwizdała, elected for the years 2016-2020, by the former Rector, Prof. Bernard Lammek who held the post for two consecutive terms.

Prof. Bernard Lammek was the UG’s Rector from 2008. With emotion, he recollected starting his work at the university in 1969 and the two terms in office. Prof. Lammek’s thanks were extended to the entire academic community – the academic staff, the deans, the rector and chancellery authorities, the administrative staff, the University’s Student Parliament and other student organisations, as well as national and local authorities for their support in many undertakings and in particular for their help in creating the University of Gdańsk’s Baltic Campus which, with the building of the Institute of Biotechnology, has almost reached completion.

“Today Polish higher education faces three major challenges: the effective implementation of scientific achievement and technological progress into the economy, adjusting the quality of teaching to the needs and expectations of the economy and the external environment as well as ensuring that Polish universities become places which integrate international science and teaching and as a result are able to effectively compete with universities across the globe and in Europe”, stressed Prof. Jerzy Gwizdała, at the same time adding that the University of Gdańsk is prepared to meet those challenges. “ I see our University as a modern and dynamically developing institution, representing the natural sciences, the humanities as well as the social and the exact sciences. We have a very good scientific, research and teaching potential based in 11 faculties which this year will be educating nearly 30,000 students (27,574) in 74 fields of study. At present the University employs around 3,200 staff, including 1,725 academic teachers, with as many as 574 professors and doctors with ‘habilitation’. We are a new university but we currently have 29 rights to award PhDs and 18 rights to award ‘habilitation’ titles. The University of Gdańsk is located in a beautiful campus in Gdańsk- Oliwa, as well as in Sopot and Gdynia, and boasts a well-developed infrastructure which has been dynamically expanding over the past years”.

The University of Gdańsk’s latest investment plans include the creation of an Eco-Park within the UG’s Baltic Campus (the investment has already received funding from the Regional Operational Programme of the Pomeranian Voivodeship for the years 2014 – 2020 and the Voivodeship Fund for Environmental Protection and Water Management), expanding the Faculty of Mathematics, Physics and Informatics by a new Institute of Informatics building, creating a Laboratory of TV Recording Simulation and Film Documentation as well as building a UG Sports Centre. The academic year 2016/2017 will also bring the complete renovation of Student Home no.4 as well as the expansion and renovation of Student Home no.9.

During the ceremony Vice-Marshal of the Pomeranian Voivodeship Wiesław Byczkowski announced that two of the planned investments had just received funding from the Regional Operational Programme of the Pomeranian Voivodeship for the years 2014 – 2020, the Laboratory of TV Recording Simulation and Film Documentation to the sum of over 4,400,000 zł, and the expansion of the Faculty of Mathematics, Physics and Informatics by a new Institute of Informatics building to the sum of nearly 21,390,000 zł.

During the inauguration of the new academic year, a traditional matriculation ceremony for students and doctorate students was held. The inaugural lecture entitled “Humanistic Aspects of Statistical Application” was delivered by the former Vice-Rector for Development and Finance and current Dean of the Faculty of Management Prof. Mirosław Szreder.

In addition, awards were given for the third time in the competition for the best scientific book, the best didactic book and the best book presenting the results of a doctoral dissertation, published by the University of Gdańsk Publishing House over the past year. In the scientific book category first place went to Paweł Antonowicz for his book Bankructwa i upadłości przedsiębiorstw. Teoria – praktyka gospodarcza – studia regionalne. In the didactic book category the prize went to Elżbieta Babula, Anna Blajer-Gołębiewska, Leszek Czerwonka and Małgorzata Zielenkiewicz for their book Zastosowanie matematyki w ekonomii i zarządzaniu/ Mathematical applications in economics and management, while the best book presenting the results of a doctoral dissertation prize went to Ewelina Damps for her book Historia Teatru Miejskiego w Gdańsku (1801–1841).

Mr Romuald Meyer, Chairman of the Board of the Graduate Society of the Sopot Academy of Maritime Trade, the Sopot Academy of Economics and the UG’s Faculty of Economics awarded medals on the occasion of the Society’s 70 years of existence to professors Jerzy Bieliński, Krzysztof Dobrowolski, Dariusz Filar, Jerzy Gwizdała, Bernard Lammek, Mirosław Szreder, Krystyna Żołądkiewicz, Dr Ewa Wycinka and Maciej Goniszewski M.A.

At the end of the ceremony inaugural congratulatory letters (attached) were read out, sent in by, amongst others the President of the Republic of Poland Andrzej Duda and the Minister of Science and Higher Education Jarosław Gowin. The letter on behalf of Vice-Minister of Culture and National Heritage Jarosław Sellin was read out by Mr Dawid Krupej.

The ceremony culminated in a concert of the Academic Choir of the University of Gdańsk under the direction of Prof. Marcin Tomczak.

Over 30,000 students, doctoral and postgraduate students as well as 1,700 academic teachers have started the new academic year 2016/2017 at the University of Gdańsk. Initial admissions data indicate that the university admitted 11,643 students to the first year of study, including 9,421 full-time students and 2,222 extramural students.

The University of Gdańsk currently offers 74 fields of study with 220 specialities. There is a new course on offer – Business Chemistry (full-time, first-cycle B. Eng. studies) as well as two new specialities for which direct applications are now being accepted: Natural Language Processing in English Philology (full-time, second-cycle studies) and Psycho-sexology in Psychology (full-time and extramural long-cycle MA studies). It is worth noting that over the past three years the University of Gdańsk has introduced 17 new fields of study, including courses in English. Curricula for the new fields of study have been prepared in conjunction with experts who practice particular subjects. In this respect, the university draws on the knowledge and experience of prospective employers who additionally create opportunities for attractive work placement and internships.

The following courses of study have enjoyed the greatest popularity during this year’s admissions: Scandinavian Studies – 10.25; Criminology – 9.31; Psychology, long-cycle MA studies – 8.80; English Philology – 8.69 and Artistic Institution Management (managerial speciality) – 7.53. There was a total of no less than 18 fields of study with more than 4 candidates for one place. The most desirable amongst the exact sciences were Biotechnology with 4.63 candidates per place and Information Technology with 4.07.

The university is currently running 35 scientific, research-and-development and didactic projects to the value of nearly 50 million zł (data for 2016) and 262 national scientific projects to the total value of 137 million zł (mostly long-term projects, lasting several years, with the value given being the entire amount of funding). The total number of citations in prestigious scientific journals in the Web of Science database over the past three years equals 113 445 (data for the years 2014−2016). For the University of Gdańsk the so-called Hirsch index, which measures the citation impact of scientific publications, currently stands at 113. The parametric assessment carried out by the Ministry of Science and Higher Education is very high, with six faculties of the UG assigned category A and five – category B, none with the lowest category C. The University of Gdańsk can also boast some international successes. It has received funds to implement 4 projects as part of Horizon 2020, the European Union’s largest research programme, which gives the university a good standing as regards innovation. 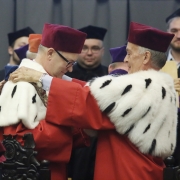 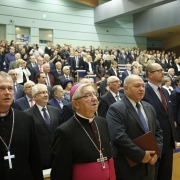 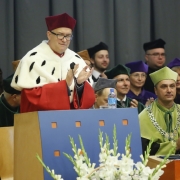 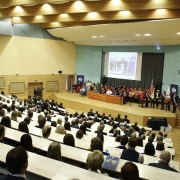 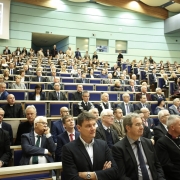 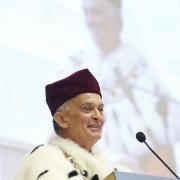 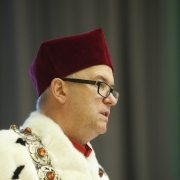 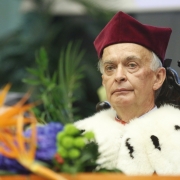 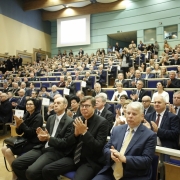 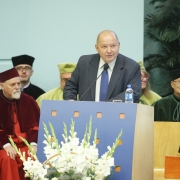 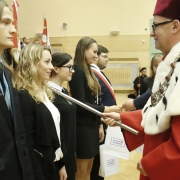 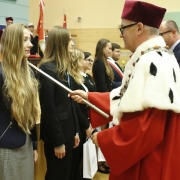 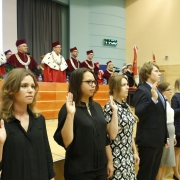 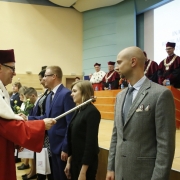 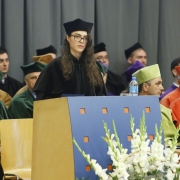 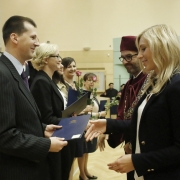 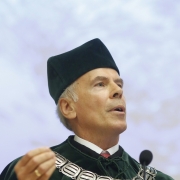 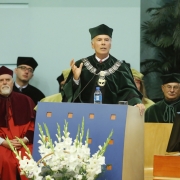 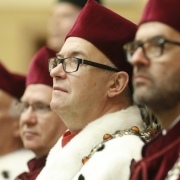 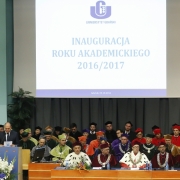 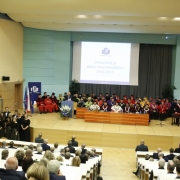 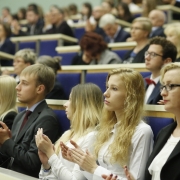 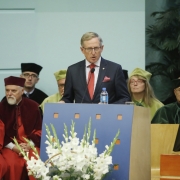 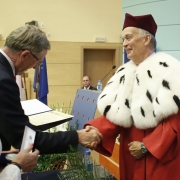 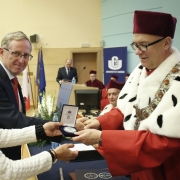 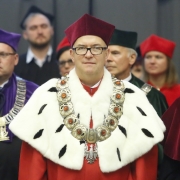 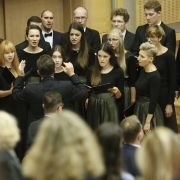