The grand opening of the “Dune Laboratory II” was held on 13 October 2016. The aim of the project was to create an artificial dune to be used for the preservation of dune species, including protected species, research into the survival and development of plants found in sandy soil (psammophytes) and for educational purposes. The Marshal of the Pomeranian Voivodeship Mieczysław Struk has granted the project his patronage, with the DCT Gdańsk SA Container Terminal and the Foundation for the Development of the University of Gdańsk as partners.

The ceremony commenced at 12:00 with a short speech by the Dean of the UG’s Faculty of Biology Prof. Dr hab. Włodzimierz Meissner, followed by a screening of a film by Jakub Typiak on the implementation of the “Dune Laboratory”” project. Afterwards Chancellor of the University of Gdańsk Dr Mirosław Czapiewski, Chair of DCT Gdańsk SA Maciek Kwiatkowski and Chairman of the Foundation for the Development of the University of Gdańsk Dr hab. Andrzej Letkiewicz cut the ribbon, thus officially opening the “Dune Laboratory II”.

The event was attended by representatives of DCT Gdańsk SA: Chair Maciek Kwiatkowski, Director for Projects Michał Biernacki, Director for Legal and Corporate Affairs Grzegorz Pawłowski; representatives of the LOTOS Group: Chair of the LOTOS Foundation Patrycja Zbytniewska and the Director’s Marketing and Communications Advisor Jowita Twardowska. Other participants in the event included co-partners connected with the project “Protecting NATURE on Sobieszewo Island” (“Chronimy NATURĘ na Wyspie Sobieszewskiej”): the Ornithological Station of the Museum and Institute of Zoology of the Polish Academy of Sciences, the Gdańsk Culture Archipelago ─ Treasure Island (Wyspa Skarbów), The Association of the Friends of Sobieszewo Island and the KULING Water Birds Research Group. The event was also attended by the Head of the Inspectorate of Coastal Protection Roman Kołodziejski, the Chief Forrester of the Gdańsk Forest Division Marek Zeman, the Chair of the Gdańsk Community Foundation Andrzej Stelmasiewicz and representatives of institutions connected with environmental protection in the Pomeranian Voivodeship ─ Regional Director for Environmental Protection Danuta Makowska and Director of the Department of Environment of the Gdańsk City Hall Maciej Lorek. The Voivode of Pomerania Dariusz Drelich sent a letter to the Dean of the UG’s Faculty of Biology with best wishes for the future, the achievement of all the intended goals and satisfaction with the work for the good of the development and protection of our Voivodeship’s natural assets.

On the history of the “Dune Laboratory”

The project has been run by the Biological Station since 2013. The grand opening of the first stage of the “Dune Laboratory” took place on 6 May 2014, with the first species of dune plants introduced the same day: the sea holly, the European beach grass, the sea pea, the beach wormwood, the festuca, and the dwarf everlast.

In May and October 2014 the Station’s partners, together with employees of the companies involved and students of the UG’s Faculty of Biology, took part in replanting dune species from an area designated for the expansion of the Container Terminal. In 2015 classes were held in the artificial dune for students and pupils from the Tri-City and the environs. Essential maintenance work and research were conducted as part of an MA thesis concerning the biology and general condition of the meta-planted species (meta-planting consists in moving plant specimens to a new, safe location).

The end of 2015 saw the emergence of the “Dune Laboratory II” project, concerning the expansion and modernisation of the dune surroundings. Work with heavy machinery lasted nearly a month. In total, around 4.5 tonnes of were transported to the Dune Laboratory. All this was done so that the artificial dune and the area around it could provide the most faithful imitation of the natural coastal habitat. In late June/early July 2016 work commenced on the technical infrastructure such as platforms and fences surrounding the area of the Dune Laboratory. 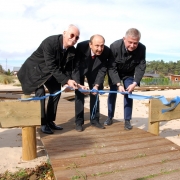 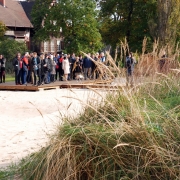 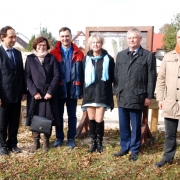