Mgr Wacław Kulczykowski, a PhD student at the University of Gdańsk’s Faculty of History, has won the 2016 City of Gdańsk Jan Uphagen Award for Young Scientists in the category of the Humanities and Social Sciences for his “outstanding achievements in the fields of archaeology, revitalisation and recording as well as conserving the cultural antiquities of Pomerania”.

This year’s winner in the category of the Exact and Natural Sciences was Dr Eng. Adrian Bekasiewicz from the Technical University of Gdańsk.

The award ceremony was held on 10 February 2017 at Uphagen House in Gdańsk.

The City of Gdańsk Jan Uphagen Award for Young Scientists, previously known as ‘the Young Heweliusz’, has been awarded since 2003 for outstanding academic achievement to students and graduates of Gdańsk’s higher education institutions below the age of 30.

Mgr Wacław Kulczykowski is an archaeology graduate from the University of Gdańsk and a doctoral student at its Faculty of History. His research interest and the theme of his current doctoral dissertation is the mediaeval system of supplying cities with water and related hydrotechnical structures in Pomerania and former East Prussia. He has written nine articles and four chapters in scientific monographs, in Polish and English. He has participated in eight scientific projects and eleven archaeological digs, including sites in Gdańsk (ul. Św. Ducha, ul. 3 Maja and Wisłoujście Fortress). He receives funding for his research from academic grants, he has twice led archaeological research and revitalisation work and taken on the role of archaeological assistant. He has won a grant for best doctoral student (in both 2015 and 2016), the University of Gdańsk Rector’s Award for outstanding achievement (2015) and the third eNgage competition organised by the Foundation for Polish Science (2014). He is active in popularising knowledge about archaeology, e.g. during academic festivals and open lectures, educational classes and workshops for children and teenagers. 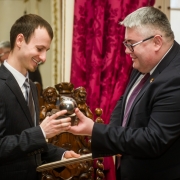 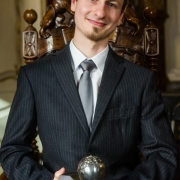 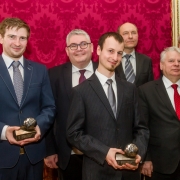