On 7 February 2017 a letter of intent was signed between the Borough of the City of Sopot, represented by the Mayor of Sopot Dr Jacek Karnowski, and the University of Gdańsk, represented by the Rector of the University of Gdańsk Professor UG, Dr hab. Jerzy Gwizdała. The letter expresses the desire to continue joint efforts to support the education of Sopot school children by university staff. The partners will jointly develop initiatives such as the ‘Between’ or ‘Literacki Sopot’ festivals, aimed at popularising knowledge of the humanities. The Deputy Mayor of Sopot, Joanna Cichocka-Gula, also attended the signing ceremony. 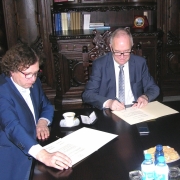 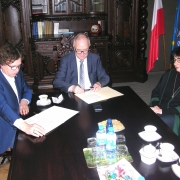