The event, which lasted several hours, was an invitation to exchange knowledge and views, and to initiate cooperation as part of an international project.

Participants were greeted by Prof. Dr hab. Krzysztof Bielawski, Vice-Rector for Development. The opening lecture entitled “The Biotechnological Potential of the Baltic Sea” was given by Prof. Dr hab. Hanna Mazur-Marzec from the Laboratory of Marine Biotechnology of the Faculty of Oceanography and Geography in which she presented ways of using marine biological resources to devise new technologies and products, numerous examples of products which use such resources, as well as the enormous and as yet unexploited potential of the Baltic and the challenges which blue biotechnology will still have to face. Prof. Mazur-Marzec also discussed the participation and achievements of the University of Gdańsk in this field.

The lecture was followed by Dr hab. Marek Grzybowski, professor at Gdynia Maritime University and Chairman of the Management Board of the Polish Maritime Cluster, discussing the marine cluster as an alliance between science, business and administration and an area where knowledge about the blue economy can be created and transferred.

The issue of commercialisation of scientific research in the science-business relationship was presented by Dr Karol Śledzik, Director of the UG’s Technology Transfer Centre.

The event’s crowning lecture was given by Prof. UG, Dr hab. Eng. Konrad Ocalewicz from the Faculty of Oceanography and Geography in which he discussed the Baltic Blue Biotechnology ALLIANCE Project. ALLIANCE is an international network of experienced scientific institutions, technology parks and businesses cooperating for the development of blue biotechnology in the Baltic region, the University of Gdańsk being one of the project partners. The symposium was a chance to encourage all interested parties to become involved in active cooperation and to put forward ideas. Amongst others, ALLIANCE offers mentoring for researchers, companies and organisations interested in using the Baltic Sea resources in their activity. For the second time now, recruitment is underway for promising companies and entrepreneurs, as well as individuals with ideas, who may need expert assistance in the development of a product or service devised on the basis of blue biotechnology. The deadline for applications is 3 March 2017. The most promising candidates selected will be invited to present their idea between 3 - 5 April 2017 to an international panel of experts. The winners will join the group of ALLIANCE partners. Head of the project is Prof. UG, Dr hab. Katarzyna Palińska (katarzyna.palinska@ug.edu.pl). 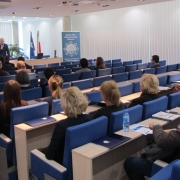 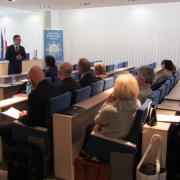 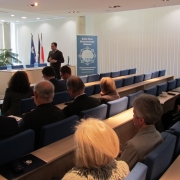