The University of Gdańsk has come fourth in a ranking of Polish universities and research units where the highest number of individuals received a START Scholarship from the Foundation for Polish Science, which is aimed at the most talented young researchers. This is a great honour for the University and good news for the young researchers. Gdańsk took third place in a city ranking. START is the largest Polish scholarship programme for the best young researchers under the age of 30 from all branches of science.

Among the six young researchers from the University of Gdańsk are:

The awards ceremony for the START scholarships was held on 27 May 2017 at the Royal Castle in Warsaw. Scholarship winners were accompanied by the University of Gdańsk’s Vice-Rector for Development Prof. Krzysztof Bielawski.

START is the largest Polish scholarship programme for the best young researchers and is open to anyone under the age of 30 from all branches of science. It is also the Foundation’s longest running programme. The candidates’ achievement, documented via patents or publications in renowned Polish or international scientific journals, undergoes assessment by scientists who are authorities in their fields. The total number of winners in all competitions, including this year’s, currently stands at over 2,800. The scholarships, which may be used for any purpose, are aimed at assisting young researchers during the difficult beginnings of their academic careers and allowing them to devote themselves fully to science.

The winners of this year’s competition were selected from amongst 1,152 candidates. Their average age is 28 and 48% of the winners have the title of doctor (in Poland the average age for obtaining a doctoral degree is 35).

Information on this year’s results and the programme: http://www.fnp.org.pl/en/stypendia-start-2017-przyznane/ 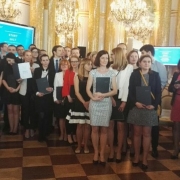