The University of Gdańsk Academic Choir has won all the major awards during the first Andrea Del Verrocchio International Choral Festival in Florence – gold medal in the category “Mixed Choirs”, gold medal in the category “Sacred Music”, special prize for the best rendition of a contemporary piece (“Gloria” by Huo Won Woo) and the Festival’s Grand Prix. The choir performed under the direction of Aneta Majda.

The Andrea Del Verrocchio International Choral Festival, which took place between 26−29 September 2017, is a new project to by Leonardo Sagliocca, organiser of numerous choral festivals in Florence.

Prof. Marcin Tomczak’s choir performed in two categories – “Mixed Choirs” and “Sacred Music”, for which it was awarded gold medals. The choir qualified for the Grand Prix competition, in which it competed against choirs from Russia (Choir of the Church of the Smolensk Icon of the Mother of God) and Indonesia (Gratia Choir of Soegijapranata Catholic University).

During the Festival, the choir was led by Aneta Majda, conductor, pianist, graduate of the Stanisław Moniuszko Music Academy in Gdańsk, at present working towards her PhD in Conducting, assistant to the Chief Conductor of the Choir, Prof. Marcin Tomczak. 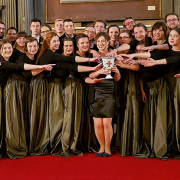