The Oceanograf, the state-of-the-art research vessel of the University of Gdańsk’s Institute of Oceanography, has been put into operation. Although scientists are still testing the vessel’s possibilities, research into the environment and nature of the Baltic is already underway. We spent a day on board this modern catamaran with our camera and we were really impressed.

“The Oceanograf has a very wide range of possibilities. It is equipped with devices for conducting seabed surveys and also for trawl fishing. The range of options is very great indeed”, said ship’s captain Daniel Sieńko.

He also told us that the ship’s possibilities can be continuously expanded, with new equipment being added. “At the moment we have covered about 1,500 miles across the Bay of Gdańsk”, he said.

The Oceanograf received its safety certificate from the Maritime Office in Gdynia on 15 May this year and on the following day it set off on its first voyage across the Bay of Gdańsk.

“After a period of trying and testing particular systems and devices, we can now say that everything works fine and the ship does not cause any major problems. I hope we will reach standards as high as those in fleets which have been operating for years”, says Dariusz Kowalik, electronic engineer on the Oceanograf.

The ship’s range at economic speed is 2,500 nautical miles, and navigation autonomy is 21 days. The Oceanograf’s homeport is Gdynia. The ship can carry a maximum of 20 people.

Construction of the Oceanograf began at the Nauta Ship-repair Yard in Gdynia in May 2013, the launching ceremony was held in June 2015 and the ship naming ceremony in 2016.

“Here methane is a compound which tells us a bit more about the process of eutrophication, whether the demersal zone is polluted and whether we can expect oxygen deficiency”, said Dr Aleksandra Brodecka-Goluch.

Sha also added that if methane is present in sediments, “then we may talk of the degradation of the demersal environment, with a great amount of decomposing organic matter”. The project will be implemented until mid-2020 and its results will allow for the supervision of the researched areas with regard to various geochemical and physical parameters and for the monitoring of changes in the marine environment.

Hydroacoustic measurements were the main focus of the research. “It was important for us to carry out different measurements simultaneously, with chemists, biologists, physicists and geologists working alongside each other and employing a whole spectrum of devices. These are specialist devices and there are very few units in Poland which can operate them. As soon as we get it all working well and we synchronise our activities, we can become involved in some highly professional research”, explained Dr Jakub Idczak, adjunct at the Division of Physical Oceanography at the UG’s Institute of Oceanography.

Dr Idczak added that, apart from devices for hydroacoustic measurements, the Oceanograf is also equipped with devices such as a bathymetric rosette for taking water samples; probes for measuring salinity, temperature and pressure at various depths; an underwater vehicle; a meteorological station; optical devices; an aerosol probe or vibra probe.

He also stated that the Oceanograf allows students to gain the experience they need. “In today’s market there’s a demand for people who can operate the equipment which we have here at our disposal”, he said.

The Oceanograf has replaced the long-serving vessel K/H Oceanograf-2. It is intended for interdisciplinary biological, chemical, physical and geological research into the environment and nature of the Baltic Sea as well as for classes for the students of Oceanography and other fields of study. It boasts wet, measuring, sterile and thermostated laboratories as well as a seminar and computer room. The catamaran will sail the Baltic Sea but voyages into other areas have not been ruled out.

Apart from the vessel being used for research and didactic purposes, the UG also intends for this ultramodern ship to be used in a wide range of commercial business projects.

The Institute of Oceanography of the University of Gdańsk’s Faculty of Oceanography conducts interdisciplinary research into the coastal zone of shelf seas, mainly in the region of South Baltic and the Bay of Gdańsk but also in the polar regions. Thanks to the research the Institute acquires and develops the knowledge necessary for supporting the protection and sustainable use of the marine environment. At present the Faculty of Oceanography and Geography of the University of Gdańsk has 1,454 undergraduate and doctoral students. 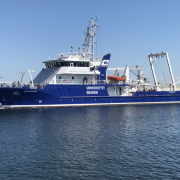