Great success of University of Gdańsk Academic Choir in Spain

Great success of University of Gdańsk Academic Choir in Spain

The Academic Choir of the University of Gdańsk proved unrivalled at the International Choir Festival and Competition “CANCO MEDITERRANIA” Barcelona – Lloret de Mar. The choir, under the direction of Prof. Marcin Tomczak, won the festival’s GRAND PRIX, four gold diplomas and a special cash prize.

The Academic Choir of the University of Gdańsk participated in as many as four of the five categories of the International Choir Festival and Competition: sacral music, Catalan music, Pau Casals music and popular music. As part of the competition’s audition, the choir gave a 35-minute concert, following the rules of the competition and performing the pieces from all categories one after another, which was additionally difficult given the short amount of time between the subsequent, stylistically diverse, categories.

The Academic Choir of the University of Gdańsk was awarded by the festival’s jury with the following distinctions:

The performance of the choir, conducted by Prof. Marcin Tomczak, was given enthusiastic applause by the audience gathered at the audition who especially appreciated the rendition of ‘Cant de la Senyera’, of special importance to Catalonians, as well as a compilation of Abba songs, which the choir performed at the end of the competition’s audition.

About the competition and the festival

The International Choir Festival and Competition “CANCO MEDITERRANIA” is held annually in Barcelona and Lloret de Mar. So far a total of 134 choirs have participated in all the editions of the festival from such countries as Poland, Iceland, France, Germany, Italy, Slovakia, Belgium, Russia, Lithuania, Slovenia, Estonia, Finland, Hungary, Czech Republic, Faroe Islands, Philippines, Ukraine, Indonesia or Spain.

The competition is organised for amateur choirs in the following categories:

It is also divided into the following age groups:

Additionally, the competition is divided into five music categories:

Each choir may enter any number of music categories. The festival culminates in choral concerts organised at the Cathedral in Barcelona and in other churches across the capital of Catalonia.

More information about the event: http://www.serrabrava.eu/pl/ 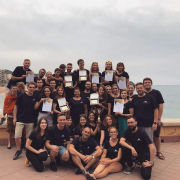