The 45th Red Rose competition for the best student in Pomerania was won by Agnieszka Piotrowska-Kirschling from the University of Gdańsk for her impressive research achievement in the field of chemistry and her organizational activity. One of the prizes in the competition was a car. The Psychological Research Circle “Experior” from the University of Gdańsk was also among the finalists and the title of the best scientific circle was awarded to the Scientific Circle SimLE from the Gdańsk University of Technology.

Agnieszka Piotrowska-Kirschling from the University of Gdańsk contended for the title of the best Pomeranian student 2019, the Red Rose statuette and the valuable prize in the form of a car against this year’s other seven finalists. The jury awarded her for her impressive research achievement and organizational activity.

Agnieszka Piotrowska-Kirschling is a student of Chemistry at the Faculty of Chemistry of the University of Gdańsk (second year of full-time second-cycle studies). Her academic interests concentrate around research into coordination complexes with potential biological activity. She is author and co-author of dozen or so publications in highly ranked scientific journals (including some on the ISI Master Journal List i.e. journals cited worldwide), with the Impact Factor for her publications currently standing at 17.161. She has participated in numerous seminars and scientific conferences at which she has presented a number of research communiques and posters. She is a POWER programme scientific intern at Ziaja Ltd. She is also actively involved in the Student Council and Parliament (as a member of a few committees), she has also co-organised the 17th All-Poland Seminar for Undergraduate and Doctoral Students “Na pograniczu chemii i biologii” 2019 as well as a training session in ISO standards (as a specialist in quality control and ISO). She can boast a significant contribution to the promotion of the Faculty of Chemistry as part of the AKADEMIA Fair and open days. Since 2015 she has been a member of the Polish Chemical Society. Having graduated from the 1st Degree State Music School, she also enjoys playing the piano and the guitar.

The title of the best scientific circle went to the Scientific Circle SimLE from the Gdańsk University of Technology (together with a prize of 12,000 PLN). The Psychological Research Circle “Experior” from the University of Gdańsk was among the eight finalists, with the members boasting outstanding achievement, including first place at the StRuNa All-Poland Competition (in the category Scientific Circle 2018), organised by the Student Scientific Movement (Studencki Ruch Naukowy) under the patronage of the Ministry of Science and Higher Education.   The research activity of “Experior”’s members has resulted in numerous publications, including those in highly ranked scientific journals, with a total of 25 scientific articles, 20 presentations at international and 26 at domestic scientific conferences, 2 Diamond Grants from the Ministry of Science and Higher Education, 9 scholarships for the best students from the Ministry of Science and Higher Education, 4 internships as part of the Erasmus Plus programme, 10 Rector awards for students as well as 39 scholarships in other categories. Members of the circle are involved in the implementation of international and domestic research and social projects, including “Study addiction among students of lower secondary and secondary schools in Poland”; “A causative and community-based model of narcissism in the context of romantic relationships”; “Personality and psychosocial aspects of functioning of Internet, social media and pornography users”; “Behavioral addictions among secondary school pupils: studies and programmes to popularise the issue” or “Longitudinal study of study addiction and its relationship with work addiction, socioeconomic factors, academic and organizational variables, and health” – implemented at the University of Bergen in Norway.

The Red Rose competition has been organised for 57 years and goes back to the tradition of the legendary Student Club “Żak”. The Red Rose was initially awarded to poets and writers and later on to young researchers and political scientists. The competition was revived in 1999 and it is currently organised by the Red Rose Association with the involvement of Pomeranian higher education institutions. The Red Rose statuettes and valuable prizes go to the most talented students and most outstanding student scientific circles.

This year’s gala was held on Sunday, 2 June 2019 at Gdynia Maritime University. Next year’s Red Rose competition will be hosted by the University of Gdańsk.

Descriptions of all the finalists and their achievements as well as a video report of their presentations can be found at www.czerwonaroza.org.pl as well as https://www.facebook.com/czerwonaroza. 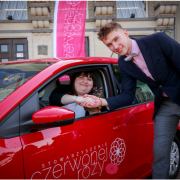 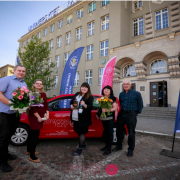 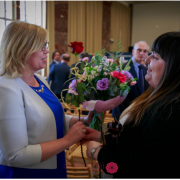 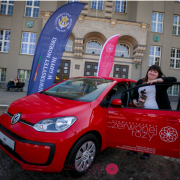 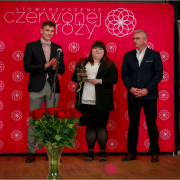