Home / University / About us / Distinguished and talented / Agnieszka Felczykowska – Will cyanobacteria help our health? 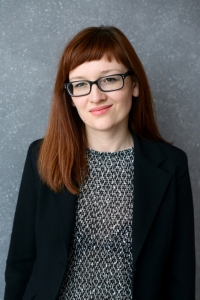 Agnieszka Felczykowska was born on 5 August 1986 in Świecie. She received her MScEng in Biotechnology at the Gdańsk University of Technology. Since 2010 she has been a student of the Biology, Ecology and Microbiology PhD course  at the University of Gdańsk under the supervision of Prof. Dr hab. Grzegorz Węgrzyn. The subject of her doctoral thesis concerns the search for and the characteristics of new compounds isolated from the cyanobacteria from the Baltic Sea as well as secondary lichen products and their derivatives with a potential application in numerous branches of the economy and human life, from medicine (in diagnostics and pharmacology), cosmetics and cleaning products, to agriculture. In her work she combines the classic techniques of the analysis of extracts obtained from living organisms with a highly innovative research strategy, based on creating genomic libraries from the  DNA isolated directly from environmental samples and on the analysis of these libraries in search of protein products of a very specific activity.

For six years Agnieszka Felczykowska, together with her colleagues from the Department of Molecular Biology of the University of Gdańsk’s Faculty of Biology, has been coordinating the collection of parcels for poor families as part of the Szlachetna Paczka programme. So far, thanks to their activity, 8 families in the greatest need (over 40 people in total) have received the parcels. In addition, she has been an active volunteer in the Akademia Przyszłości programme where, as a tutor, she helps one boy to believe in himself and instils in him the ‘fisherman philosophy’. She’s an avid book buyer, loves the cinema and theatre and in her free time tries to search for and try out new recipes for interesting cakes. 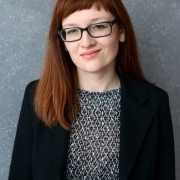 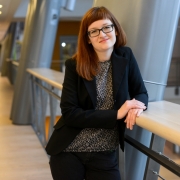 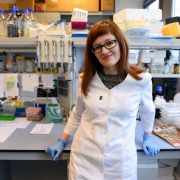 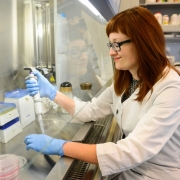 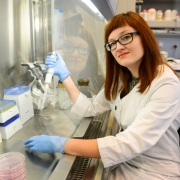 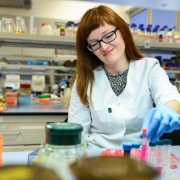