Home » Incoming students » Why Study@UG » About region » Places to visit 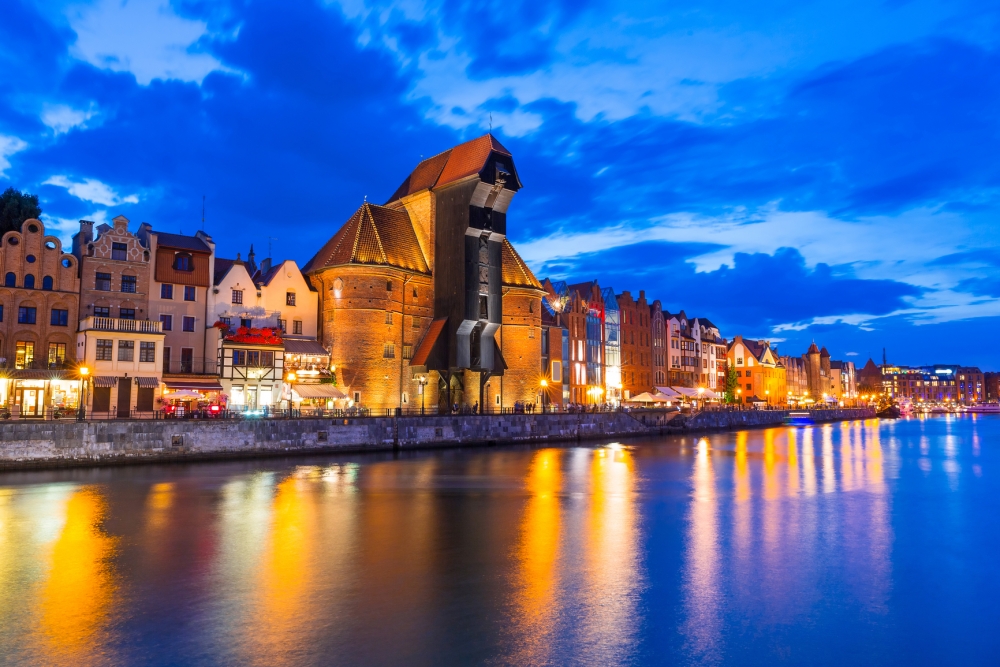 The capital of the Pomeranian region, a city of more than a thousand years of tradition, the symbolic spot where the Second World War started. When you visit Gdańsk, you’ll see right away the beauty of the architecture of the Old Town and you’ll be able to enjoy a wide range of culture, from museums to lots of monuments, but Gdańsk is not just about histor. It’s a city throbbing with life. You’ll find here all the entertainment and good food that come with any large city.

ZOO – come to see the Three Cities’ own zoo. On its 120 hectare site, you’ll be able to look at exotic animals from all the continents of the world.

Oliwa Cathedral – Founded in 1186, Oliwa Cathedral in Gdańsk has undergone many changes in the course of its existence. It’s a combination of styles from Romanesque through Gothic and Baroque right up to the modern. It’s the longest church in Poland.

The Neptune Fountain – This symbol of Gdańsk stands in the Old Town. The statue of the King of the Sea in its middle dates from 1633.

The Town Hall (Ratusz) – There’s no precise date for the building of the Town Hall, but it’s estimated that the first phase of construction took place in the years 1379-1382. At present it holds the headquarters of City of Gdańsk Historical Museum.

Mary’s Basilica (Bazylika Mariacka) – This is the largest brick Gothic place of worship in Europe.

Arthur’s Court (Dwór Artusa) – Built between 1476 and1481, it was a place for meetings, banquets, weddings. Plays were performed here too. From 1742 it was a stock-exchange.

Westerplatte – Where the Second World War started. You can visit the cemetery of the Polish soldiers who died here in 1939, Guardhouse no. 1, the ruins of the barracks, Guardhouse no. 3, a tank, and the Westerplatte Monument that was built after the War.

Long Market (Długi Targ) – Walking along Długi Targ, you feel the unique atmosphere of Gdańsk’s Old Town with its distinctive architecture and its wide range of entertainment and  fine dining.

European Solidarity Center – The Center celebrates the people and the ideas that helped to build civil society in Poland. It’s a meeting place for people who care about the future of the world. It’s a venue for conferences, debates, projects for children and young people, plays, and film shows. It also offers a home for NGOs that work for the common good, for freedom and human rights. 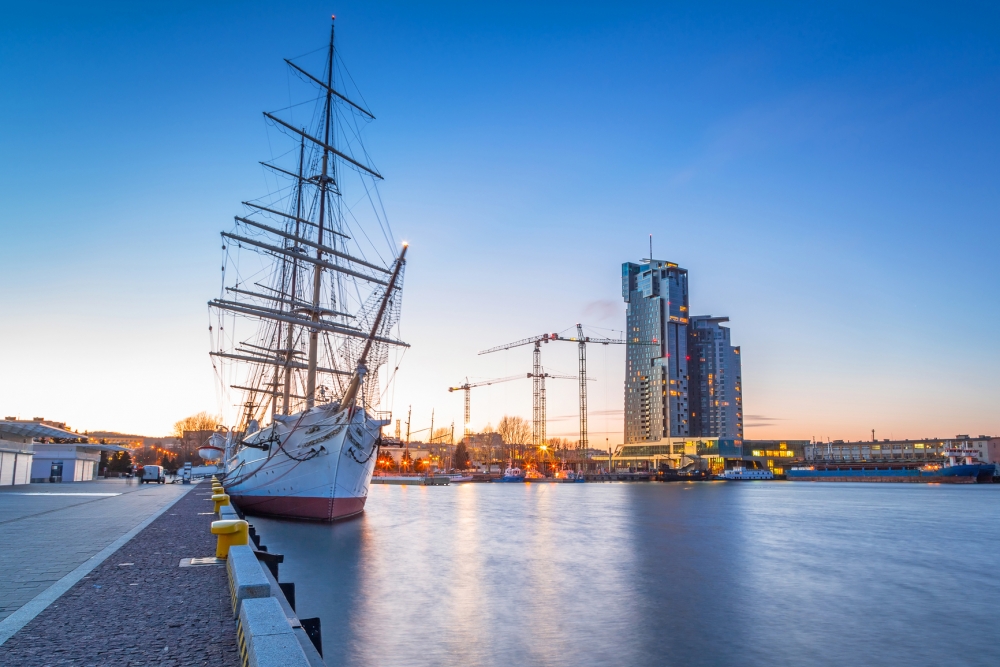 As opposed to Gdańsk, Gdynia is a relatively young city, but it is a very modern and rapidly developing one. Its modern architecture and its maritime character are distinctive. The city is throbbing with life and has many tourist attractions, such as its lovely promenades, marinas that organize boat trips, and great sea views from its nearby cliffs.

The Sea Boulevard (Bulwar nadmorski) – The Boulevard is the most popular place for a stroll in Gdynia. It’s 1.5 km long and is great for just walking or for running, roller skating, or biking.

The Marina – You can really enjoy the sea here. You can take trips on fast motorboats or sailboats, and you can gaze at the luxury yachts moored in the marina.

The Gdynia Aquarium – Located on Kościuszko Square, the Gdynia Aquarium gives you a chance to see exotic fish from all over the world here in the center of the city. The Aquarium has an extensive education program for those who want to know more about sea life.

The Cliff Walk – If you want to get some great views, take a walk along the Gdynia Cliffs. The path runs from the pier in Orłowo to the Sea Boulevard in the center of Gdynia.

The Pier in Orłowo – It measures 180m and it’s open the whole year free of charge.

Infobox – An information point where you can find out all about Gdynia, take part in cultural events, and take in great views from the viewing point. 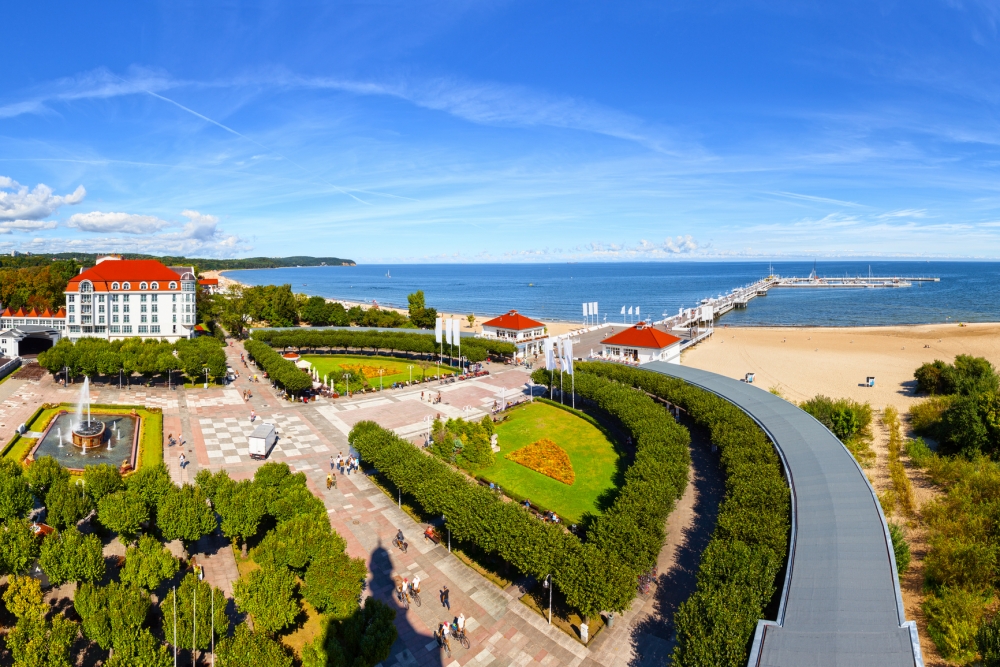 Sopot is the smallest of the Three Cities, but no less important for that. Sopot is a well-known seaside resort and spa. It never sleeps. It’s a place where artists, university people, and tourists meet. Here you’ll find exhibitions, concerts, festivals, conferences, and international conventions. It’s famous for its wonderful beaches, its streets full of cafés, restaurants, and art galleries. It offers a breath of fresh air after a hard day in the city.

Monte Cassino Street – Sopot’s flagship street is one the places most visited by tourists. It has very many restaurants, pubs, and cafés.

The Opera in the Woods (Opera Leśna) – A summer amphitheater, covering 4 hectares, in which big Sopot concerts and festivals are held.

The Horse Race Track (Hipodrom) – Most days it’s a place of peace and greenery, and then it bursts into throbbing life when there are riding competitions, exhibitions, and other large-scale events.

There are three  big sports stadiums in the Three Cities, which are venues for world-class sporting events, trade fairs, and concerts of world famous stars.