THE UNIVERSITY OF GDAŃSK IS THE LARGEST UNIVERSITY IN THE POMERANIAN REGION AND IS A FOCAL POINT FOR ALL THAT’S BEST!

A world-class faculty, winners of many prestigious prizes, inventors, professionals linking the worlds of research and business

The teaching and research staff of the University is 1,700 strong. In such fields as biology, bio-technology, chemistry, oceanography, quantum physics, pedagogy, psychology, law, and economics, the University is among the leading institutions in Poland, and also enjoys recognition at an international level. A vital aspect of our scientific and scholarly research is the practical application of the ideas and projects developed by our staff. They are regularly commissioned to write expert opinions. The University is an incubator for enterprises in areas such as biotechnology, biology, and chemistry.

University of Gdańsk scientists have won the “Polish Nobel Prize,” the Foundation for Polish Science Prize. Quantum physicists have taken the prize twice: Professor Ryszard Horodecki in 2008, and Professor Marek Żukowski in 2013. Members of our staff have been awarded grants by the National Center for Research and Development, the National Science Center, and also the Foundation for Polish Science.

One of the most important scientific successes achieved by researchers from the University of Gdańsk is the development, by a team led by Professor dr hab. Grzegorz Węgrzyn from the Faculty of Biology, of a method of treating Sanfilippo syndrome, previously thought incurable. Work on the treatment has now entered the third phase of clinical trials. In addition, a team led by Professor Franciszek Kasprzykowski (of the Faculty of Chemistry) has developed the antimicrobial agent Cystapep 1.

Scientists from the University of Gdańsk have helped to build many international research consortia, for example:

- “Industrial Crops producing added value Oils for Novel chemicals” (ICON), - the aim of this project is to apply genetic engineering to “improve” the oils of selected industrial plants.

- “Sub-seabed CO2 Storage: Impact on Marine Ecosystems (E)” – the aim of this project is to determine risks connected with storing CO2 under the seabed.

- The University of Gdańsk has also signed an agreement with the European Council for Scientific research to implement a project under the direction of Professor dr hab. Ryszard Horodecki, entitled “Quantum resOurces: conceptuaLs and APplicationS – QOLAPS” within the IDEAS – Advanced Grant Program.

- The project MOBI4Health aims to expand the research potential of MWB UG and GUMed in the field of molecular biotechnology. It is largely based on the spectrum analysis of the masses of biological particles, which will make it possible to develop innovations in the field of biotechnology serving the life and health of humans and the environment.

The University of Gdańsk co-operates  with  some 120 university-level institutions in most of the countries of Europe and the world.

In the last few years, the infrastructure of the University of Gdańsk has been transformed. Its dynamic development has meant a virtual “rebirth” of the University. Most of the University is concentrated on three campuses. The Baltic Campus of the University of Gdańsk is in Gdańsk-Oliwa has dramatically expanded. Buildings dating from the 1970s and housing the Faculties of Languages and Literature, History, and Mathematics and Physics were supplemented in the 1990s by the new Law and Administration Building. Subsequently one of the most modern academic libraries in Poland, the UG Main Library, was opened. Between 2007 and 2013, new buildings were added:

The University continues to expand.

Our development plans also call for the construction soon of a building for the Institute of Computer Studies, covering an area of more than 6,800 square meters. A sports complex will also be built, which will hold a sports’ hall, a stadium with running track and jumping area for light athletics, and tennis courts and a tennis hall. It is also planned to open new student dormitories on the Oliwa Campus and in Sopot.

Besides the campus in Gdańsk-Oliwa, the University of Gdańsk also has a presence in Sopot. The Economics and Management Faculties are based there, as are the recently opened Teaching and Conference Center and the Computer Center. A new wing has also been added to the Economics Faculty building. The University also has a site in Gdynia – the recently modernized and substantially expanded Institute of Oceanography.

A wide range of courses: 11 faculties, 71 fields of study, 201 specialized programs. A rich tradition of research and scholarship, the University’s links with the sea, celebrated research stations with an international reputation, like the Marine Station of the Institute of Oceanography in Hel, the Research Station for Bird Migration, and the Biological Research Station.

The Faculty’s research work includes: issues related to stress-related proteins; control of the development of viruses in host cells; the molecular basis of human diseases; colonial fish-eating birds in the ecosystem of the Vistula Lagoon and the Bay of Gdańsk; the biology, ecology, and behavior of shorebirds; the functioning of Arctic ecosystems.

The Faculty’s most important research areas include: search for chemical compounds with potential utility in biology and medicine; work on understanding the relationship between the structure and properties of chemical compounds; environmental research in the field of monitoring toxic substances; estimating risk factors of new industrial chemicals for humans and the environment .

The Faculty has an excellent reputation in Poland for education and research in the area of economy and international business and trade relations. It was one of the first faculties in Poland to develop research and education programs in the field of the economy of European integration. Students can use the specialized computerized workshops, Dealing Room and the Thomson Reuters Data Suite.

Faculty of Languages and Literature

The Faculty is outstanding above all in research and education relating to the sea. The Faculty houses two centers of excellence, recognized by the EU. The results of its regional research into changes in the natural environment of the Pomeranian region, and into the geographical dimension of socio-economic change have helped shape environmental management policies.

Research interests include particular areas of law: the theory and philosophy of the state, and law as a historical discipline. It also focuses on the law of the sea, the international law of the sea, protection of the maritime environment, the legal system and governance of Pomeranian cities, and maritime criminal studies. The Faculty possesses a Museum of Crime Studies that is unique in Poland.

The results of research conducted by the Faculty of Management have had an impact on current understanding of finance, business economics, accountancy, business management, statistics, insurance, econometrics, economic IT, and marketing. The results make it possible to understand economic processes, especially on a micro scale, to describe them more accurately, and to shape business practices according to them.

Research work includes: the development of new molecular markers with applications in the diagnosis and therapy of viral and bacterial diseases and cancers in humans; these markers are also suitable for diagnosis of early stages of neuro-degenerative diseases. Research is also carried out on recombinant vaccines against viral diseases in animals; the operations of DNA chaperone proteins.

The University’s motto is (in Latin) In mari via tua (The sea is your road), and this prompts the University’s orientation toward the sea. You can see this in some of our leading subjects – biology, geography, environmental protection, and oceanography. The Faculty of Law and Administration specializes, among other subjects, in research into the law of the sea, international law of the sea, and maritime criminal studies. The Faculty of Economics houses an Institute of Maritime Transport and Trade. Literary scholars have for long pursued research into the literature of varying epochs and its relation with marine subjects in Pomerania. Historians’ research is dominated by issues connected with the Baltic region, and the history of Gdańsk and Pomerania.

The University of Gdańsk is not just about science and scholarship – it’s also about culture and sport! The Academic Choir, the Jantar Song and Dance Ensemble, and the Academic Cultural Center Alternator organize important cultural events that have a resonance for the whole Pomeranian region. Sport is also an important part of academic life, and the teams of the UG Academic Sports Union and the Physical Education and Sports Section have won medals and prizes in the most important sports events in Poland and the world.

The University of Gdańsk has 205 student organizations, associations, and research/study groups.

The Academic Choir has a fine reputation in Poland and the world. It has won many prizes with its music. The Jantar Song and Dance Ensemble has enjoys considerable renown.  The Academic Cultural center Alternator organizes cultural events that have a resonance for the whole Pomeranian region. Several creative groups work under the umbrella of the “Alternator” to organize the widest variety of events – festivals, film shows, plays, dance shows, discussion panels, and concerts. Sport is an important part of University life. Students can choose from as many as 25 sports at UG.

Teams from the Academic Sports Union and the Physical Education and Sports Section win medals at major sports events in Poland and the world.

Every year around 30,000 students from Poland and the world study at the University of Gdańsk!

In the course of the University’s forty-five year history, the number of faculties has grown from six to eleven. At present these are: Biology, Chemistry, Economics, Languages and Literature, History, Social Studies, Mathematics, Physics, and Computer Science, Oceanography, Law and Administration, Management, and the Inter-Institutional Faculty of Biotechnology UG and GUMed. In the first year after its opening, the University had 9,400 students; now there are more than 30,000. Since it was founded, 170,000 students have graduated from the University. This means that the University of Gdańsk is the largest university in Pomerania and one of the largest in Poland.

University of Gdańsk graduates work in and play leading roles in firms and institutions in almost every walk of life, from highly specialized biotechnology firms through banks and cultural institutions, and in politics. 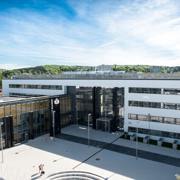